2022- The Happy Hippo will not be running this year.

The following is from a front page story in the Missoulian newspaper on Wednesday, November 1st, 2006.
For information about Hippo tours, please call
406-883-3696.

ROLLING INTO THE WATER
Entrepreneur hopes to give wet and wild tours in amphibious vehicle.
By Vince Devlin of the Missoulian
Polson – At the top of a hill at the Polson Fairgrounds, Bob Ricketts revs up the Cummins 903 high-winding V8 diesel engine and aims his vehicle for the Flathead river. Moments later, after a wild ride down the hill, he’s driven himself, plus his passengers and crew, directly into the river.
Everyone – save for Ricketts and his insurance agent, Jeff Andrews, who are up front in the cabin – is soaked.

And smiling.
And – most important – floating. 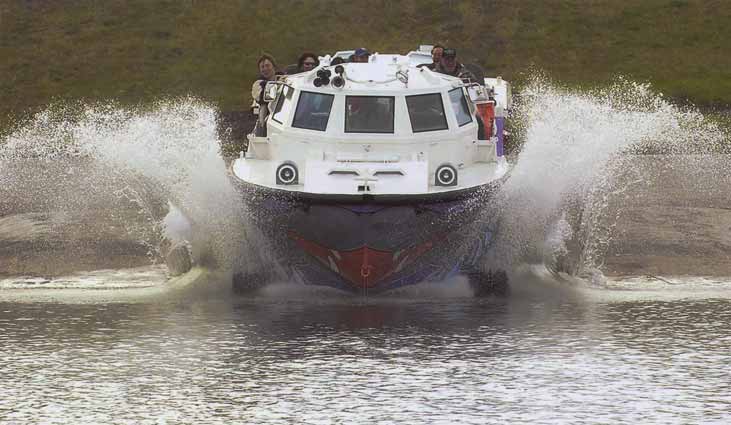 It wasn’t on a lark that Ricketts bought his 1967 LARC, a 35-foot-long Vietnam-era amphibious military vehicle.
But to listen to him, you wouldn’t know it.
“Just so everybody knows, I don’t know what I’m doing and we all may die,” Ricketts announces to his passengers before we depart Three Dog Down, the unusual store on the west end of the Polson Bridge where Ricketts sells down coats, robes, pillows, comforters and feather beds.
We bounce across the bridge – there is no suspension system on the LARC – and make out first entry into the water via the boat ramp at Riverside Park.
Ricketts pilots us under the bridge and into Flathead Lake, where we round Salish Point and return to land at the Kwa Tak Nuk Resort. Then it’s back into the lake, back around the point, back under the bridge and we’re off down the river, where Ricketts can get us back on land at the fairgrounds – and get us up high for another run at the water.

Three Dog Adventure Tours will ferry folks around by land and sea on the LARC, which Ricketts has renamed the “Happy Hippo” and hired Randy and Tammy Hart to paint it up to look like one, too.
“The biggest splash on the lake” it promises, and when you hit the water with 10 tons at 30 mph, yes, you’re going to displace a bunch of it.

Yes, you’re going to get wet.

Ricketts thinks he’ll also offer a scenic tour for people who want to ride in the thing, buy don’t necessarily want to don raincoats or swimsuits to do it. But the “wet tour” should be a gas. He’ll dress his crew in Navy whites, install a water cannon on the Happy Hippo, and part of the wet tour will include a pirate attack. Ricketts hasn’t bought a pirate ship – not yet, anyway – so the pirates will likely roar up on the Happy Hippo in boats or on wave runners and get passengers even wetter. Until, of course, the water cannon is unleashed and the pirates are blown into the lake.
“Can you imagine how great it will be for a kid to go back home and tell his friend he defeated pirate on Flathead Lake?” Ricketts asks.
The ideas never quit coming for Ricketts, who has been everything from a professional opera singer to a rodeo cowboy, and sometimes serenades shoppers in Three Dog Down by accompanying himself on his accordion. He does so from a barber chair in “the worlds smallest theatre” – capacity is 2 – and where he tells folks “I only know two songs so you won’t be here for long.””I’ll play you the first but you have to request the second, and you can run out of here at any time and I promise you I won’t be put off,” he goes on. “These rules have been created over many years and are designed for your protection.”

He’s been known to attract potential customers’ attention by having his billboards installed upside down.
Another of his companies, Doctor Down Rescue Wrap, experienced a 50 percent growth in business last year, and the Happy Hippo isn’t the start of Three Dog Adventure Tours, just its latest acquisition. He also has two old-fashioned motorized trolleys he rents out for fun, pub runs and tours.
“I bought the trolleys for fun, to haul the kids to soccer games or whatever, but a soon as people was them they wanted to rent them,” he says. “All of a sudden I had another business, through no fault of my own.” He discovered that the “fancy trolley companies” in larger cities often also offer amphibious transportation, and started looking around.”Then this one floated up, and it was like a karma thing,” Ricketts says. ” I really don’t know what I’m doing. I just luck out.” 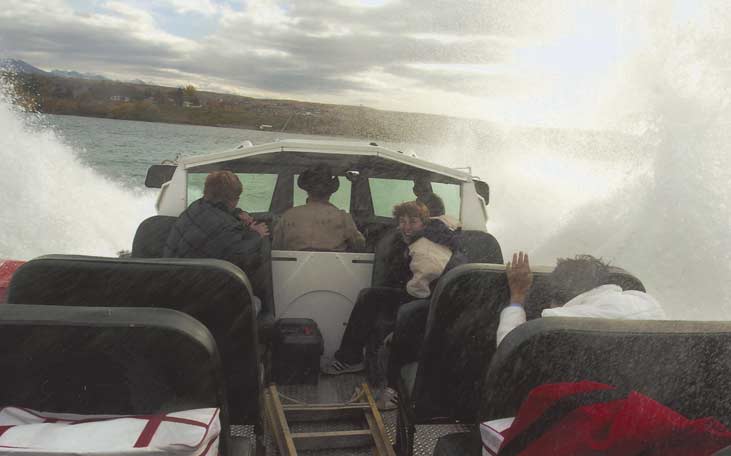 Oddly enough, while he had to go to Detroit for his second trolley, the LARC he bought was only 20 miles up the West Shore of Flathead Lake. Bob Lee, who built the mansion on Cromwel Island, had brought the LARC in to ferry construction materials from the mainland. When he was done with it, Lee donated the vehicle to the Chief Maintain Volunteer Fire Department in Dayton. But, as Ricketts has discovered, the LARC can be expensive to maintain, and so the fire department offered it up for sale. The LARC is a descendant of the DUKW (popularly pronounced “duck”), an amphibious vehicle used in World War II.”They made about 20,000 DUKWs,” Ricketts says. “But a lot of them sank. They were not that seaworthy.”
The name comes from the terminology used for military vehicles in World War II; the “D” indicates a vehicle designed in 1942, the “U” stood for “utility (amphibious),”, the “K” indicated all-wheel-drive, while the “W” meant it had two powered axles.
LARC, meantime, stands for lighter, amphibious, re supply, cargo.”There are only 1,000 of them made,” Ricketts says. “It can do 30 on land, 10 in the water, and was made to carry 10,000 pounds of cargo. So even if we;re totally packed with heavy-set tourists, we will be OK.”
He also likes the diesel engine, since diesel fumes are not flammable. And its three bilge pumps have a combined capacity of removing 900 gallons of water a minute, so sinking while under attack from pirates doesn’t seem likely.”You’d have to put a torpedo in it to exceed the bilge capacity,” Ricketts says.

If the motor conks out, Ricketts says they’ll just drop anchor and call for a boat to tow them in.
“My goal is to promote Polson,” he says of his newest purchase. “We are thinking of declaring war in Bigfork, because they don’t have a navy.”
Since the Happy Hippo is capable of plowing through a foot of ice, Ricketts isn’t sure he’ll limit its use to summers – although we suspect the “wet tour” won’t run in January. But he doused his passengers, including Cindy Johnson of Polson and her parents, Dee and Dean Hanson, who were visiting from Minnesota – an a warmer October day last week.”Did you see the look on the faces of Cindy’s parents?” Ricketts says. “They were laughing the whole way. That’s what this is all about. It’s more like a trip to a Disneyland ride than anything.

A wall of water crashes down on passengers as Ricketts drives the “Hippo” into Flathead Lake. Although a sign on the boat warns passengers about getting wet, Ricketts says he will probably offer a drier trip for those not wanting to get drenched.